Dealing with a flea infestation is something that no pet owner looks forward to. Fleas are wingless parasitic insects that feed off the blood of their host. Worldwide, there are roughly 2,200 different types of fleas. However, in the United States, there are only a small number that usually infect animals. Two of the most common fleas are:

It is worth noting that the most common flea found on dogs is typically the cat flea. Dogs will usually become infested with fleas following contact with another animal or if there are fleas in the environment. Areas where a dog commonly picks up fleas include daycare centers and boarding kennels. This is because fleas cannot fly. Instead, they use their strong back legs to jump between hosts, which is easier when dogs are in close proximity.

The summer months can be a particularly troubling as flea infestations will crop up more frequently. These minuscule parasites favor temperatures between 65 and 80 degrees and thrive when humidity is between 75 and 85 percent. That said, in many parts of the United States, fleas can affect dogs all year round—not just in the summer.

Fleas will not only cause the animal to itch, but they can also spread infection too. If a dog is allergic to fleas, the itching caused by bites can be quite severe and may lead to hair loss, skin infections, and inflammation. In certain circumstances, a dog may be hypersensitive to the saliva of the flea and having just one bite from a single insect can lead to itching all over the body.

Life Cycle of the Flea

A flea will typically feed on the warm blood of the host two or three times. After feeding on a host, fleas will mate, and the female will lay its eggs up to two days later. A flea will lay up to 50 eggs each day and can lay several hundred in its life. This means that a severe infestation can appear rapidly.

Many of the eggs that a flea lay will fall off the host—finding their way into carpets, cracks in the floor, and around the yard. Once the flea egg hatches, it becomes a larva, which will then feed on digested excreted blood left by the adult fleas.

Once the larva has fed, it will become encased in a cocoon where it will develop into a fully-grown flea. This usually takes between 7 and 19 days. However, in some cases, the larva will remain dormant for up to 5 months while it waits for a host.

Flea larva thrive in cracks in floorboards, damp basements, carpet fibers, and unfinished concrete floors. Outside, they will only be able to survive in places that are moist and shaded.

Almost as soon as a flea emerges from its cocoon, it will need to feed on blood, or it will not survive long enough to mate. In ideal circumstances, the lifecycle of a flea is around two weeks. In optimal conditions, tens of thousands of fleas could infest the home very quickly. 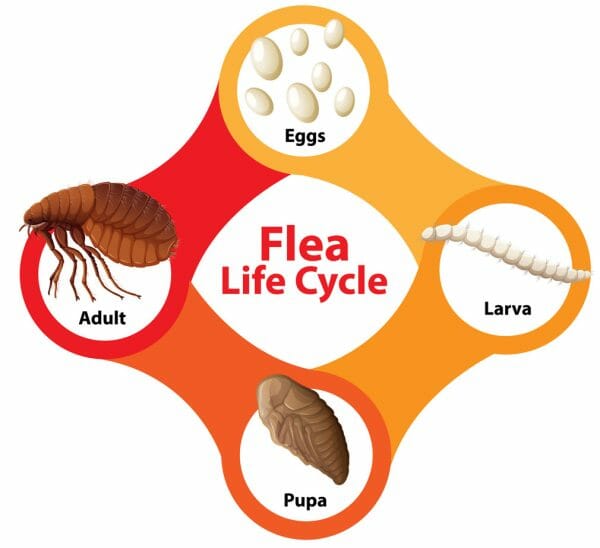 Spotting a flea infestation on a dog can be a challenge due to their size. Unlike burrowing scabies or demodex mites, fleas will scurry about on the surface of the dog’s skin.

Roughly the size of a pinhead, fleas are a dark copper color. They do not like to be exposed to the light, so finding fleas is easiest in areas of dense fur around the belly and thighs.

One of the most common signs of a flea’s infestation is the presence of flea dirt, which are dark specks that look like pepper. They will be scattered on the surface of the dog’s skin.

Flea dirt is feces and is made up of digested blood. To find out whether dirt is indeed from a flea, place some onto a piece of wet paper towel. If the dirt spreads to look like a bloodstain after a short period of time, it is a sign that the dog has fleas.

Signs of a dog of puppy flea infestation include:

How to Get Rid of a Flea Infestation

Prevention is always easier than the cure, so it is important to use either an oral or topical treatment from a veterinarian each month. Many flea preventives also work on ticks—some of which can lead to Lyme disease.

If a dog already has fleas, a veterinarian will be able to prescribe medication that will quickly kill all fleas that currently live on the animal. Anti-inflammatory medication may also be prescribed to reduce the symptoms brought about by scratching. Where the skin has become infected, antibiotics may also be necessary.

Dealing With a Flea Infestation in the Home

Removing fleas from the dog is only part of the problem. It is also important to thoroughly clean the entire home to ensure every flea larva is removed. Unfortunately, it can take some time to completely rid a home of fleas.

Many pet owners will try to get rid of fleas without resorting to chemical treatments in the first instance. Flea infestation in the home natural remedies include the following strategies.

If this does not address the problem, use a flea spray or fogger that addresses all stages of the flea life cycle or call a local pest control company.

Dealing With a Flea Infestation in the Yard

It is important to know how to kill flea infestation in the yard. The first step is to thoroughly clean all dog kennels and use an insect growth regulator such as pyriproxyfen, which lasts for a long time outdoors and works well in sunlight.

Diatomaceous Earth Food Grade Powder is an effective, non-toxic option that is safe for use around pets, plants, and children’s play spaces.

Can One Flea Cause Infestation?

Often, all it takes is for a dog to bring home one flea that it has picked up elsewhere, and the home will soon be infested unless treatment is swift.

Can Humans Be Infested with Fleas?

A flea infestation on humans is not an uncommon occurrence. Just as fleas can spread between cats, mice, and dogs, they can also make the leap to humans. Although not their preferred host, fleas will bite people.

Many pet owners have success using Bayer Advantage II Flea Control for Dogs and Cats. It is important to purchase the correct size based on the weight of your pet. Puppies and kittens will need one specifically for their age.

Others use Frontline Plus and K9Advantix II. CAPSTAR kills fleas instantaneously, but it is not a long-term treatment. CAPSTAR is used with great success to remove hundreds of fleas on a pet in minutes. Talk with your veterinarian about the best flea medication for your dog and cat.