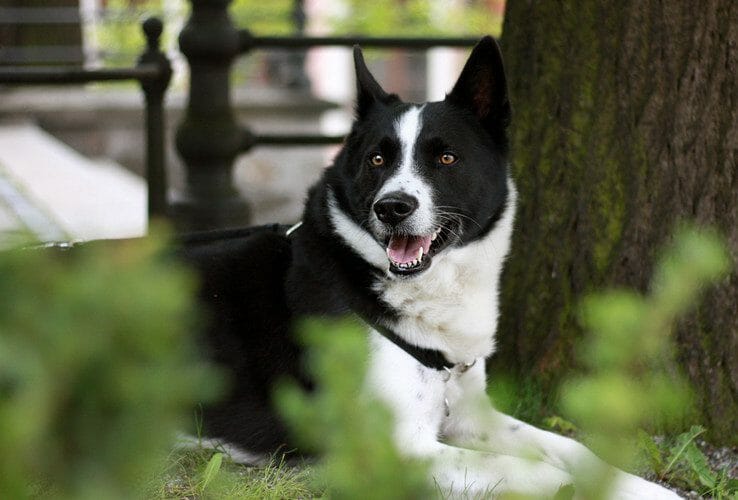 The Karelian Bear Dog (KBD)is known as Karjalankarhukoira in its native Finland. With an ancestry dating back as far as Stone Age Scandinavia, Karelian Bear Dogs are an ancient breed that has historically been a favorite of Finnish and Russian peasants. Originating from the Komi dog, the breed has long been used for hunting in East Karelia, Olonets Karelia, and Ladoga Karelia. (All of which are part of Russia.)

Although frequently used for hunting small animals such as marten and squirrels, the breed is also used in pairs or packs in much the same way as the Norwegian Elkhound is used for hunting large animals, including wolves, lynx, moose, and Eurasian brown bears. While hunting, the Karelian Bear Dog will bark. As it barks, the dog harasses and distracts its prey while its human masters move in for the kill.

The breed was given its current name in the 1930s. Its standard was officially defined in 1945 , and dogs began being registered with the Finnish Kennel Club in 1946. 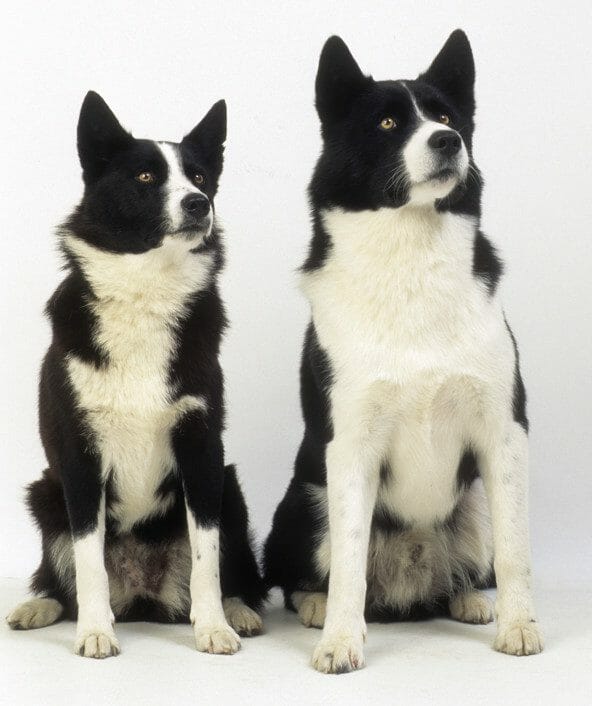 Following the end of World War II, the breed was nearly extinct. Fortunately, through thorough breeding efforts, the stock has risen considerably. All the Karelian Bear Dogs alive today can be traced back to the 40 canines that remained in the 1940s.

In recent years, Karelian Bear Dogs have been used in Japan, Canada, and the United States to minimize conflicts with bears. Breeding programs have been developed by the Wild River Bear Institute, as well as Glacier and Yosemite National Parks, Alberta Parks, Montana Fish, and the Washington State Department of Fish and Wildlife.

In Japan, Karelian Bear Dogs have been used since 2004 in the Karuizawa resort town where they have dramatically reduced bear-related incidents. 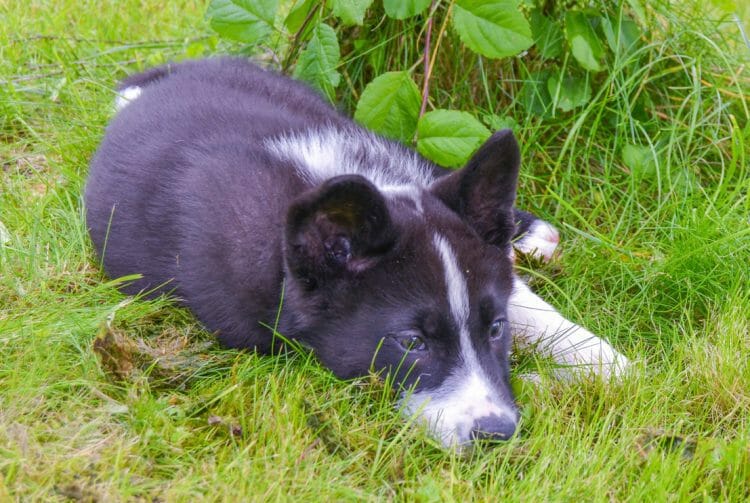 Karelian Bear Dogs are noted for their natural aggression toward other animals. For this reason, it is important to ensure deliberate and thorough socialization if they are to be kept as pets. In addition to their reaction to other animals, KBDs are also territorial canines that will alert their owners or handlers to the presence of people or animals that the dog does not recognize. Although Karelian Bear Dogs rarely bite humans, they may kill other animals if provoked or hungry.

Although hunting is in their nature and they will typically work with one master, these dogs can also learn to work alongside others. Because of their social nature, separation anxiety is very common. KBD owners must take measures to prevent this issue from developing early in the dog’s life. If left unmanaged, separation anxiety can be distressing for the dog, and it may become destructive.

Confident and able to focus for long periods of time, the Karelian Bear Dog is intelligent and requires attention and companionship from its human keeper. Due to the high energy levels of this dog, it is important that enough space is available for the dog can run. In addition, regular walks are essential.

Owning a Karelian Bear Dog is a big commitment. The breed does not make an ideal pet for anyone living in an apartment or that is out of the house for prolonged periods throughout the day. Experienced owners that can provide exercise, enrichment, socialization, and positive reinforcement training will find that this dog is both protective and loyal and will bond well with the entire family. 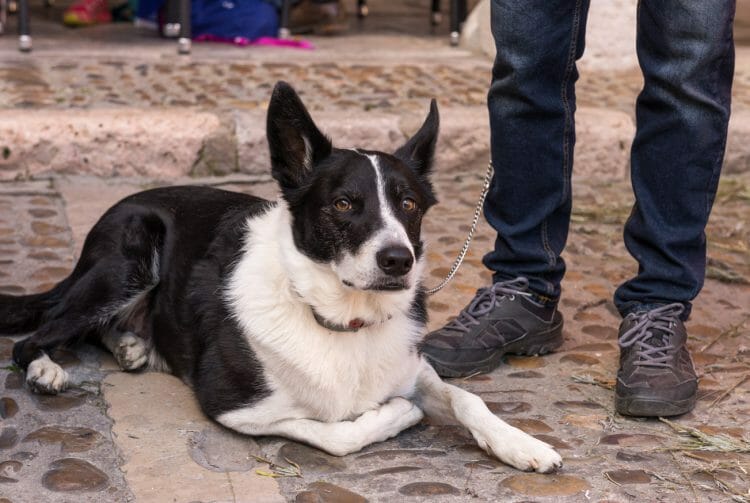 This medium-sized dog stands between 19 and 24 inches tall. Males are typically larger than females, and the average weight of an adult Karelian Bear Dog is between 44 and 50 pounds.

With a long athletic and robust body, the KBD’s head is wedge-shaped with small cocked ears that point up. Their long curly tail will arch over their back in the style of a Spitz.

The double coat of Karelian Bear Dog consists of a straight stiff outer layer and a soft, thick undercoat. The fur should be straight without any curls. The coat has been adapted to ensure warmth during the cold Scandinavian winter. KBDs will shed twice a year. However, they need continual grooming in the interim.

Breed standards dictate that the KBD should have predominantly black with white markings on the head, chest, neck, legs, and abdomen. Historically, the ancestors of Karelian Bear Dogs would have had red, wolf gray, or black and tan coats. 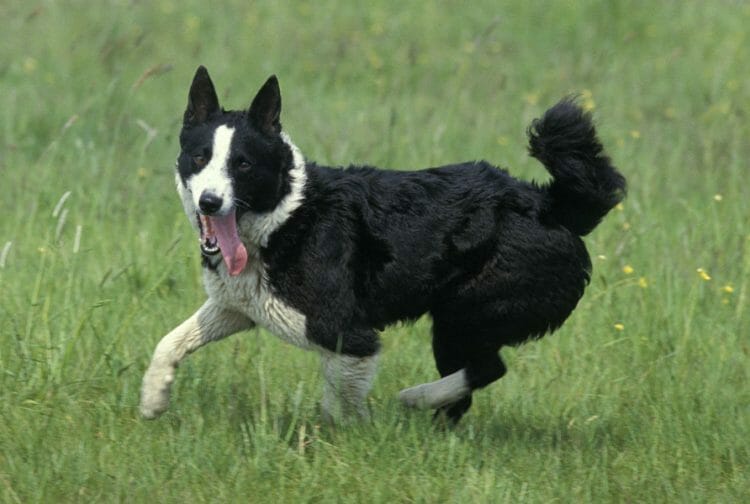 Although no dog is completely free from health risks, the Karelian Bear Dog is a relatively healthy breed with very few genetic predispositions. Providing recommended vaccinations (such as those for rabies and parvo) and regular check-ups with a vet will help these canines healthy. Health concerns that owners should be aware of include hip dysplasia and a variety of eye conditions.

Hip dysplasia is a condition that predominantly affects larger dog breeds. As the dog is growing, the ball and socket of the hip joint do not develop properly. When these parts do not fit together as they should, it can cause the bones to grind each other.

Dogs that have hip dysplasia can become lame, and the condition may develop in conjunction with osteoarthritis. Veterinarians will usually diagnose hip dysplasia using X-ray. Fortunately, the following surgical procedures can help:

These will be provided along with anti-inflammatory medication, physical therapy, and measures to control the dog’s weight. Early screening by a veterinarian will help identify the signs of this condition. 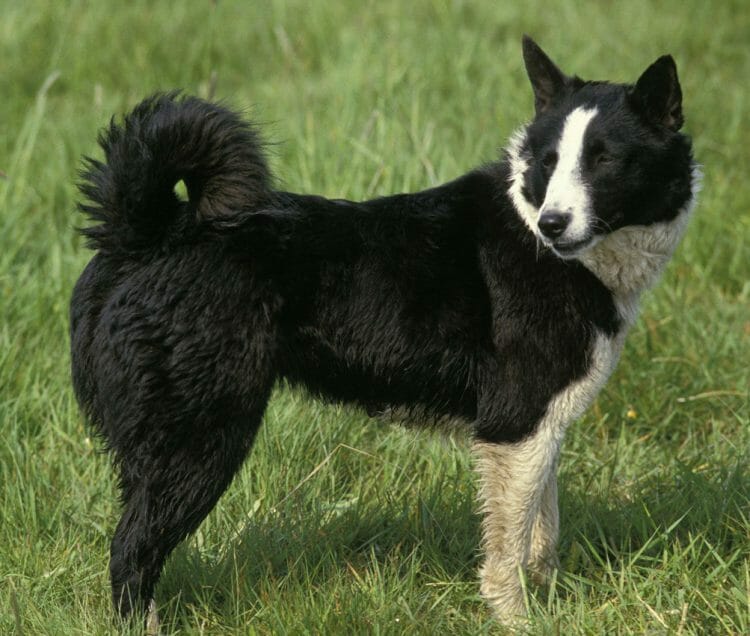 Common eye problems that may affect the Karelian Bear Dog include entropion and keratoconjunctivitis.

Entropion is a condition in which the dog’s eyelid turns in on itself. This leads to the hairs on the eyelid scratching the eye itself. Genetic factors, as well as the shape of the dog’s skull and eyeball, are all possible causes for entropion. Treatment for this condition includes eyelid tacking and surgery.

Keratoconjunctivitis (or dry eye) occurs when insufficient fluid is created by the lacrimal gland. This condition can cause severe irritation and ulcers to the dog’s eye if left untreated. Treatment largely consists of topical drops while ensuring the eye is always kept clean.