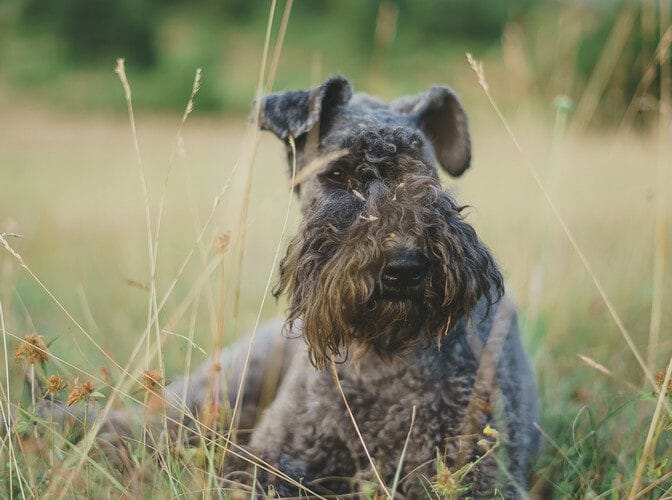 What Is a Kerry Blue Terrier?

Called “Brocaire Gorm” in their native Ireland, the name of the Kerry Blue Terrier refers to both its country of origin and its color. Also known as the Irish Blue Terrier, these dogs were initially bred for controlling vermin. Over the years, the Kerry Blue’s duties have evolved to include herding sheep and cattle. Today they are used as both working dogs and companions.

Although a Kerry Blue won the United Kingdom’s most prestigious dog show in 2000, the breed is neither common nor popular. That said, the population of these dogs is enough that they are not considered a threatened breed, such as the Dandie Dinmont Terrier or the Sealyham Terrier. 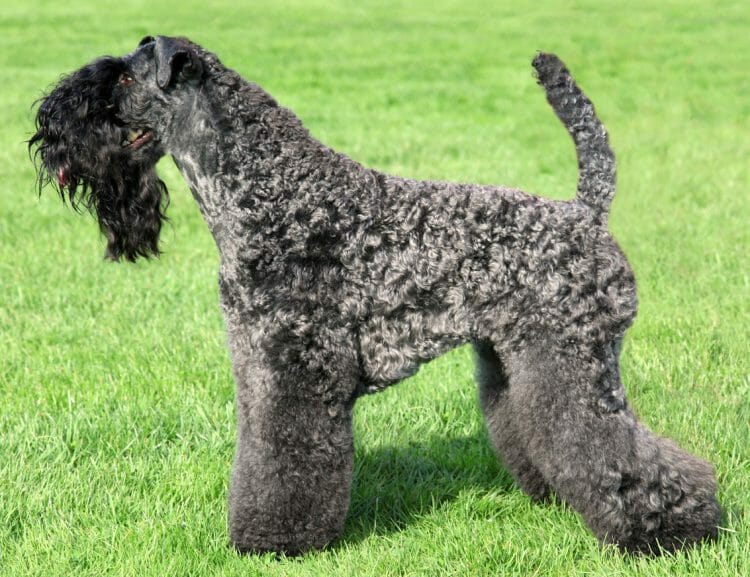 Notable characteristics of the breed include a long head, deep chest, and a short wavy coat that comes in a variety of shades of blue. The Kerry Blue Terrier coat has no undercoat. Although Kerry Blue Terrier puppies are born black, their coats become blue over the first two years of their lives.

The animated Kerry Blue is affectionate and fun-loving. These friendly dogs usually mix well with strangers, children, and other pets. As with any dog, properly supervised introductions need to be made when bringing a Kerry Blue Terrier into a home with a small child or other animals.

As a terrier, these canines are known to bark and can become aggressive around other dogs. Early socialization is key to managing this behavior. It is important to keep this active dog from becoming bored and restless with exercise and a variety of energetic games (such as fetch).

These intelligent dogs have excellent memories—making it possible to teach them a wide range of tricks. When training, use consistent positive reinforcement techniques to teach clear expectations. 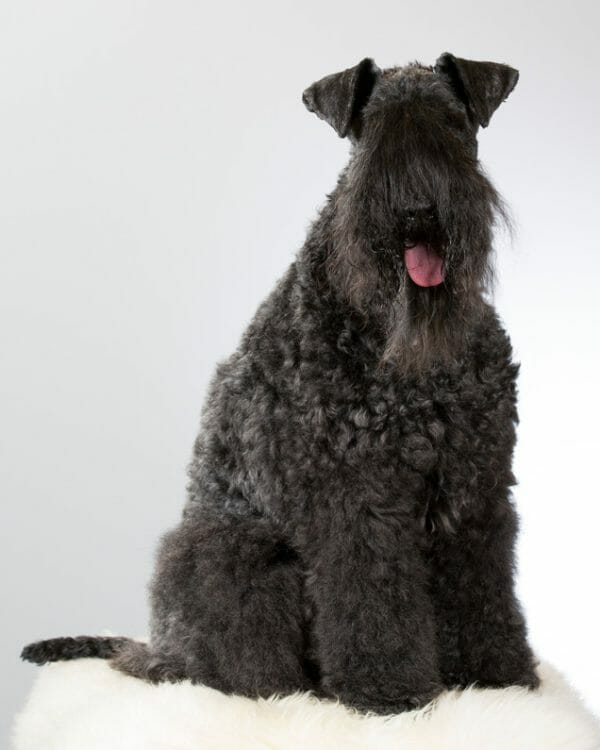 Originating from County Kerry in Ireland in the 1700s, the exact history of the breed is largely unknown. One theory is that it gets its single wavy coat from the Portuguese Water Dog. Other theories suggest that the breed’s origins lie in the Bedlington Terrier, the Soft Coated Wheaten Terrier, the Irish Wolfhound, or the Irish Terrier.

Descriptions of the breed first appeared in print in 1847, when a dog with a bluish slate color with dark blotches and patches to the hind legs and muzzle was discussed. As dog shows became more commonplace toward the end of the 19th and early part of the 20th centuries, the breed standard was defined.

The Irish revolutionary leader, Michael Collins, famously owned a Kerry Blue Terrier called Convict 224. Collins was so passionate about the breed that he tried to have Kerry Blues adopted as Ireland’s national dog.

During the struggle for Irish independence, the Dublin Irish Terrier Club held its first show. This took place outside official curfew hours. Breeders and owners that fought both for and against the Irish Republic entered their dogs. This club was so successful that it led to the establishment of the Irish Kennel Club. The Kerry Blue Terrier was the first dog registered with the club.

The United States Kerry Blue Terrier Club was established in 1922, and the breed was officially recognized by the American Kennel Club in the same year. 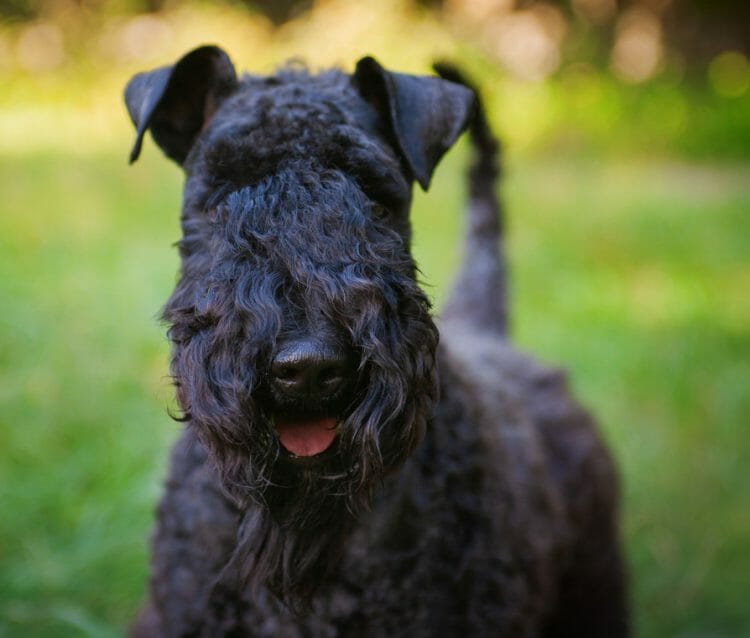 The coat of an ungroomed Kerry Blue Terrier is prone to matting. This is because they do not shed. To maintain a healthy coat, thoroughly brush and comb the dog weekly. In addition to this, full grooming every two months will ensure that the coat remains manageable. The dog’s head, ears, neck, and abdomen can be trimmed using clippers. However, the rest of its coat will require scissors. 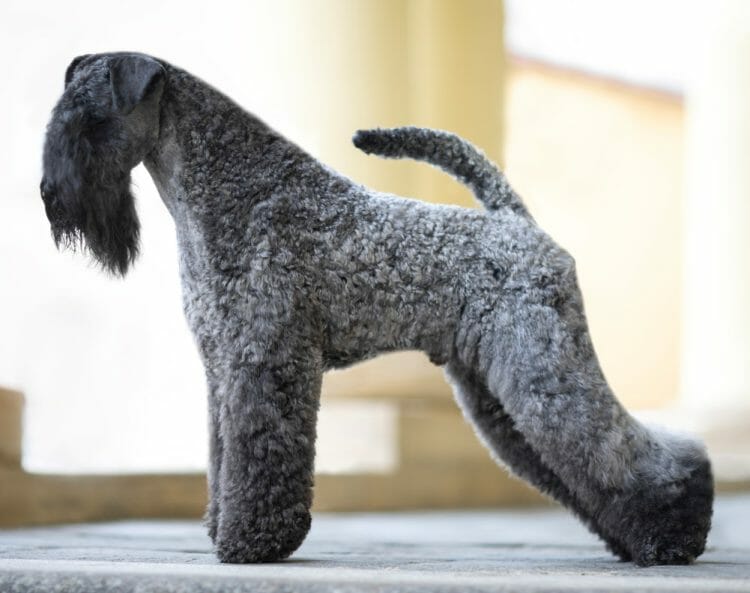 The average Kerry Blue Terrier lifespan is around 10 years, with many dogs living to the age of 13. Although the Kerry Blue Terrier is a relatively healthy breed, owners need to be aware of some of the conditions that their dog may be genetically predisposed to, including eye problems, cysts, and progressive neuronal abiotrophy (PNA).

Several eye problems are known to affect the breed, including cataracts, entropion, and dry eyes. 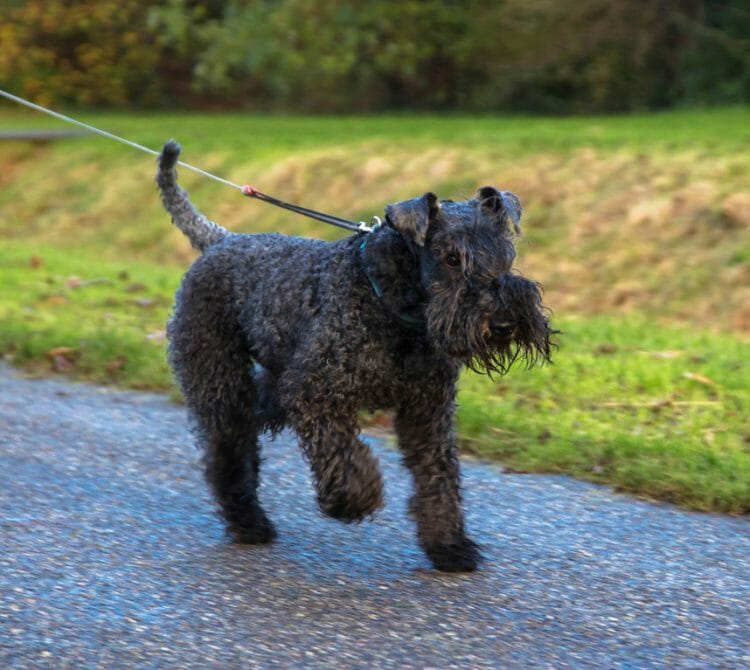 Occasionally, a Kerry Blue may develop a cyst of tumorous growth on its skin. Fortunately, these cysts are not usually malignant. However, it is always important to have them assessed by a veterinarian.

A rare condition that causes the gradual death of the cerebellum has been reported in the breed. Progressive neuronal abiotrophy (PNA) is degenerative and debilitating and affects the dog’s ability to walk. There is no cure for PNA, and the prognosis varies between dogs.

An online search will often reveal Kerry Blue Terrier puppies for sale. However, before purchasing a dog, always check animal rescue centers first. When taking in a Kerry Blue Terrier rescue, look for a no-kill shelter. These adoption centers have policies in place to never put a healthy dog down.