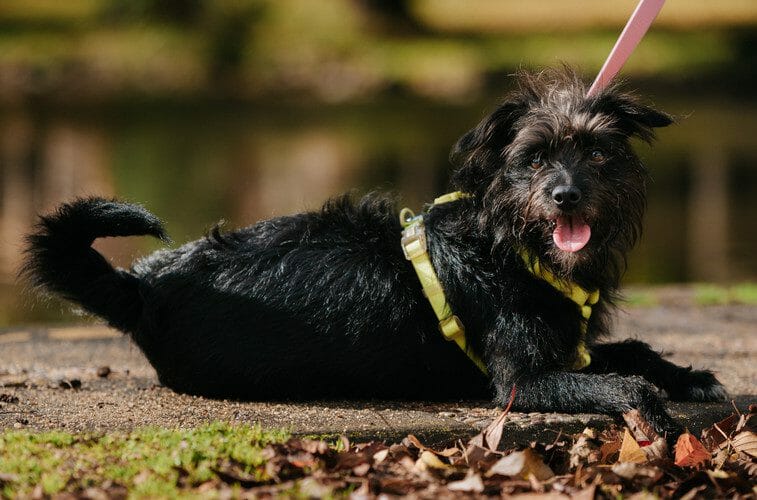 The German Affenpinscher is a breed that dates to the early 17th century. Initially used for controlling vermin in granaries, kitchens, and stables, this small and endearing working dog soon found its way into people’s homes and became a companion dog.

Their German name translates as “Monkey Terrier” on account of its ape-like appearance. Early references to dogs that resembled Affenpinschers from 1600 have been found. However, these dogs were larger than today’s breed.

After Affenpinschers started being kept as family pets, refinement of the breed occurred. They were soon entered into dog shows. Although The specific origins of the breed are not known, it is believed that they are the result of a cross between a flat-faced dog (such as a Pug) with a German Pinscher. Affenpinschers were later used to establish breeds such as the Miniature Schnauzer and the Brussels Griffon.

As with many European breeds, numbers declined following World War II. To overcome this, remaining Affenpinschers were crossbred with Brussels Griffons to help rebuild the breed. Although relatively rare, there has been a growth in interest in the breed since 2002 when an Affenpinscher called Super Nova won the Westminster Kennel Club Show. 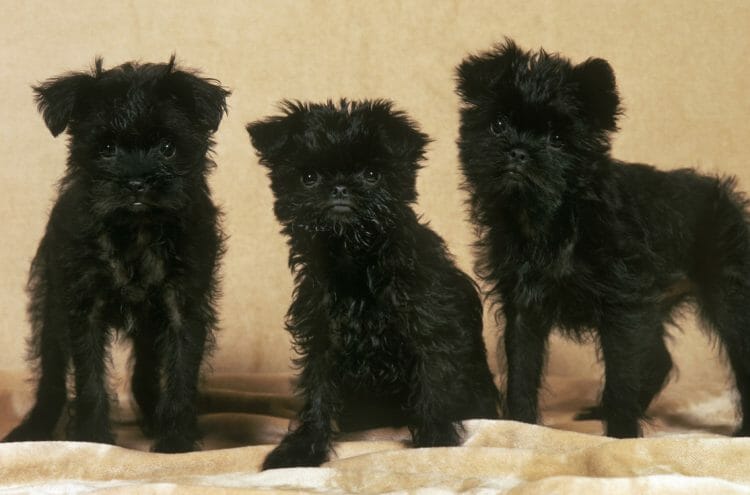 The shaggy Affenpinscher is a small dog weighing between 7 and 13 pounds. The long hair around the face gives the dog its distinctive appearance. Its body is square, and its chest is broad and deep.

The round head has a pronounced stop, and its jaw is undershot—sticking out below its short nose. An Affenpinscher’s eyes are round, black, and prominent. With a short-arched neck and straight limbs, these dogs carry their tails high. Although the practice is illegal in many countries, some of these dogs have docked tails and ears.

The Affenpinscher’s undercoat has slight curls. Although black coats are most common, additional Affenpinscher colors also include: 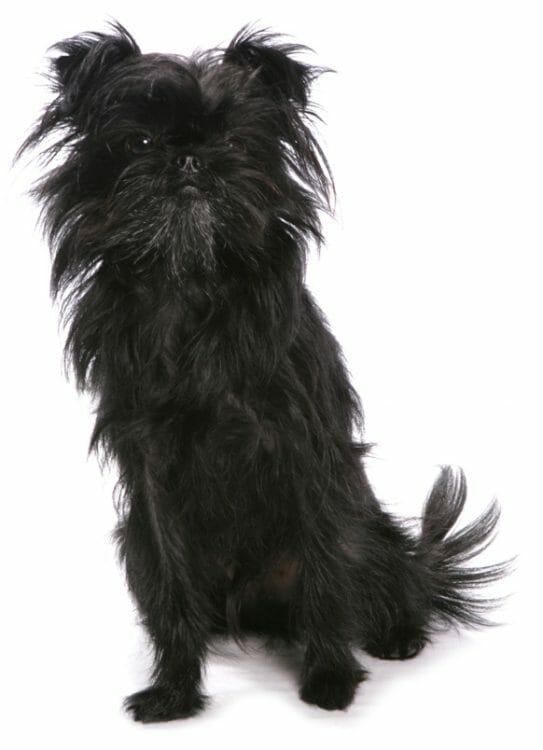 How to Groom an Affenpinscher

Although they do not frequently shed, the Affenpinscher requires a considerable amount of grooming. Brushing these canines twice a week will ensure loose fur is removed and the coat does not become matted. Affenpinschers are often included on lists of hypoallergenic dogs.

The Affenpinscher’s coat should be trimmed every few months. Particular attention should be paid to the areas around the face where longer hair can affect the dog’s sightline. Additionally, a bath every two to three months will ensure that the coat stays clean.

Wax can build up in the ears of these dogs so clean the ears every week to avoid irritation. Nails should also be trimmed monthly. Whenever possible, brush the dog’s teeth daily to prevent dental and gum disease. 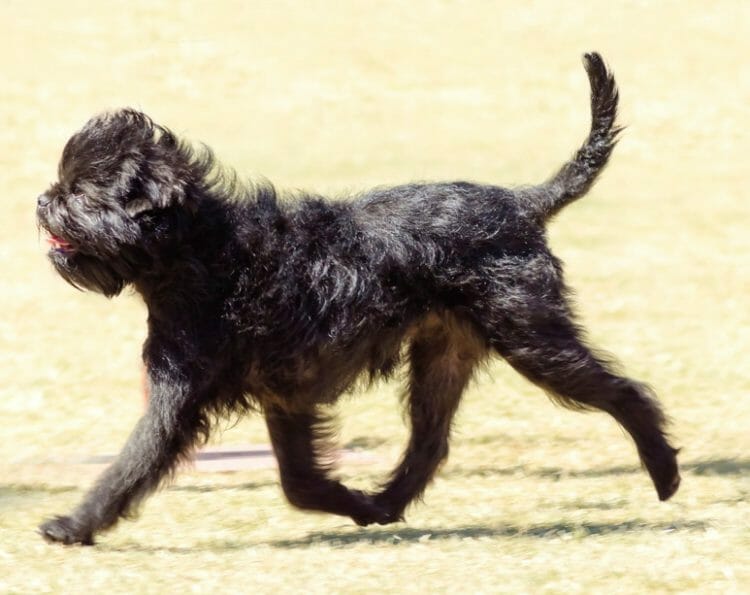 The Affenpinscher generally behaves like many other terrier breeds. Bold, stubborn, inquisitive, and sharp, these playful dogs can be quite mischievous. Their confidence and courage make them exceptional defenders. However, the headstrong Affenpinscher can be hard to manage if boundaries are not set early on. They tend to enjoy an amicable relationship with other pets around the home, particularly when they have lived together for most of their lives.

Varied positive reinforcement training is essential to ensure this dog develops good habits. Failure to train these dogs properly can lead to them becoming bored. Potty training may prove to be a challenge with these canines.

Prone to guarding food, these dogs learn quickly and respond well to commands once training is provided. This means many potential issues can be overcome by providing positive reinforcement training. Early socialization in the form of puppy training classes will also help teach these dogs how to behave around other people and animals.

The Affenpinscher loves to spend time with its family and can be affectionate and entertaining. Although they enjoy the company of young children, it is important to never allow unsupervised play. In addition, their terrier instincts mean that they enjoy climbing and frequently bark. 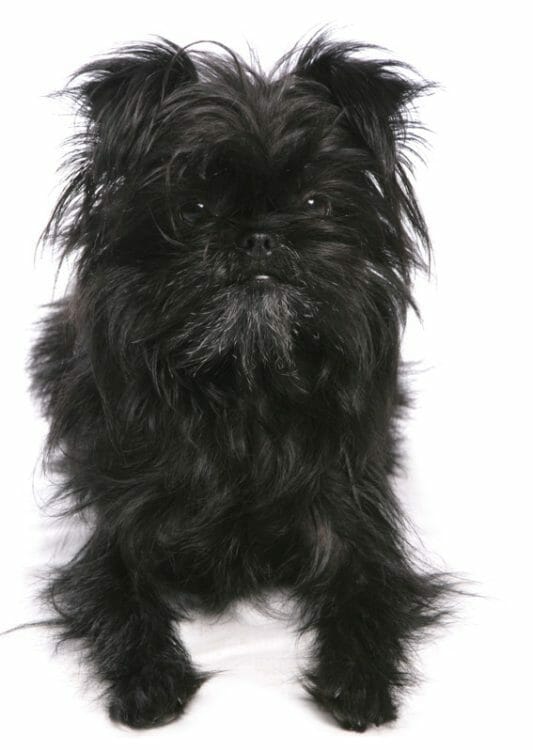 Overall, the Affenpinscher is a healthy breed. There are, however, a few genetic health concerns that owners should keep an eye out for, including patella luxation, Legg Calve Perthes disease, hip dysplasia, and heart murmurs. 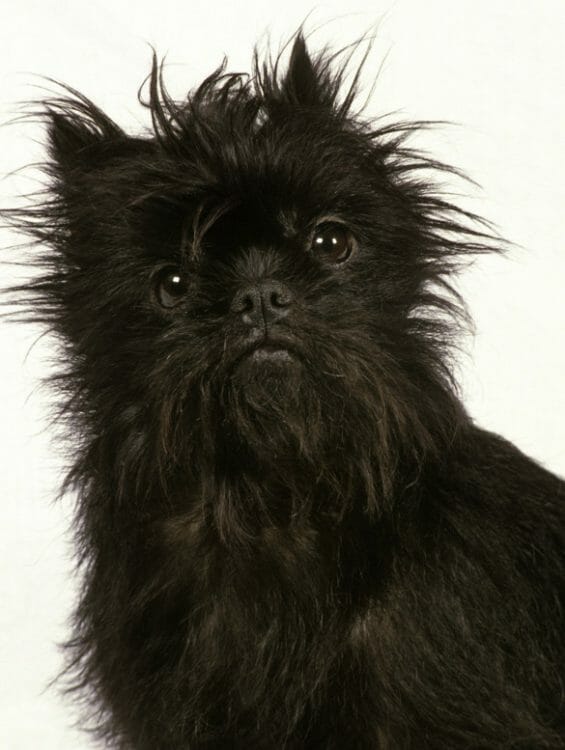 With a good diet and regular exercise, an active Affenpinscher can expect to live for between 12 and 14 years. Regular checkups will identify the early signs of any health concerns, allowing a veterinarian to address these promptly. In addition, providing recommended vaccines (such as those for rabies and parvo) will help to ensure good health. GoodPooch also recommends providing preventive medication for fleas, ticks, and heartworm, which will help protect against flea infestations and Lyme disease.

Before looking for an Affenpinscher for sale, always check adoption centers. Every year, countless dogs are put up for adoption. Wherever possible, find an Affenpinscher rescue dog at a no-kill shelter. Rehoming facilities such as these have strict policies to never put a healthy dog down.