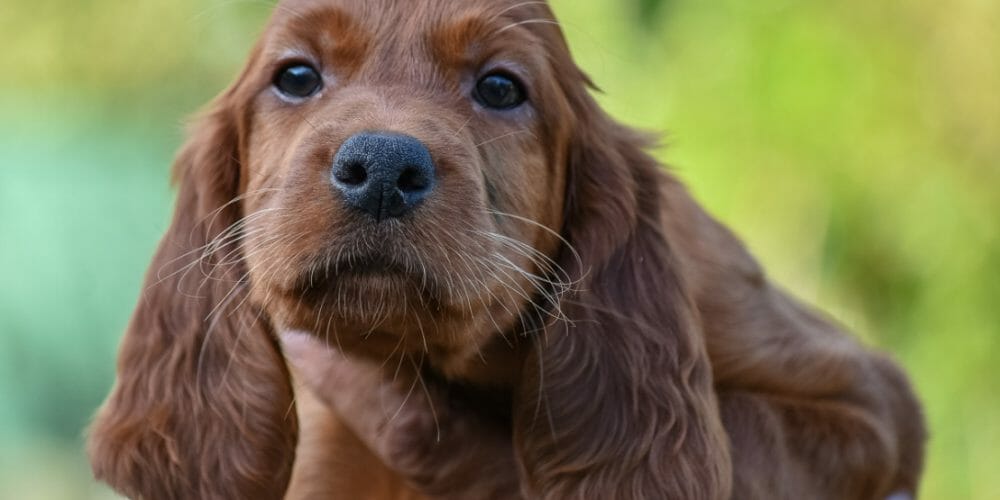 The Irish Setter, though a large dog, has been found to be an ideal companion for children. Their sophisticated, noble appearance hardly reflects their comical, playful nature.

Although Irish Setters can be a bit rowdy for very young children, older kids are quick to befriend this gentle giant, which is known to be a kid at heart throughout its life. This breed’s sweet, serene temperament coupled with its spirited nature makes it both a friend and lifelong family member. 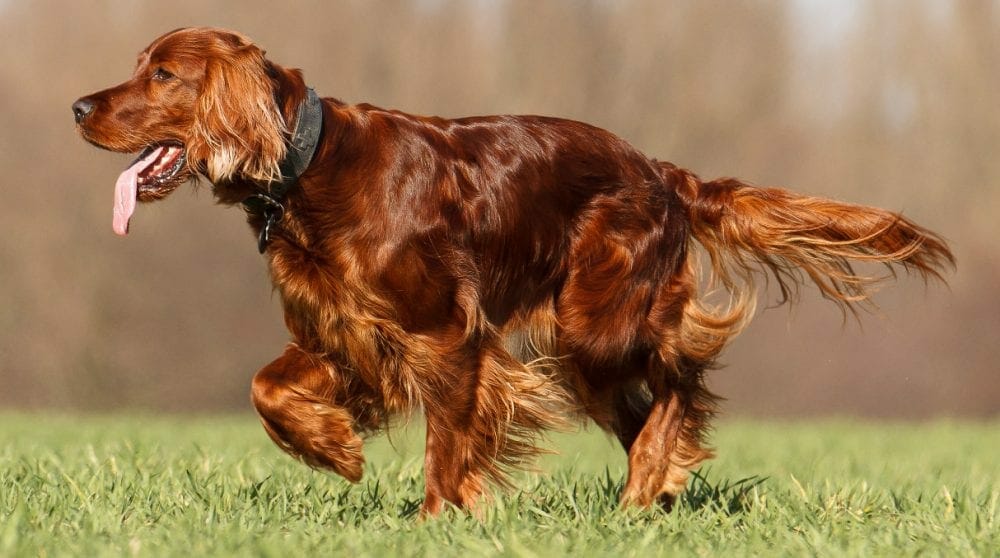 Hailing from the British Isles, the gorgeous Irish Setter made its debut as a gundog beginning in the 1800s for those hunting birds on foot. The dogs were bred to be agile and swift in its movements as a hunter.

The Irish Setter’s deep maroon coat made it easy to spot as it chased after fowls in the rolling green fields of Ireland. In more recent times, their richly colored coat continues to draw attention, making them highly coveted as pets and show dogs.

Without a doubt, the Irish Setter’s luxuriously silky mahogany coat is their most prized asset. Their wavy coat ranges in length, but their chest, legs, and belly have the longest fur. This dog possesses long, drooping ears and a fairly large muzzle. Their long, lean body features an elongated neck and legs.

The Irish Setter certainly emanates a majestic façade in its stature and gait.

Male Irish Setters weigh up to 70 pounds, while the females can potentially weigh about 60 pounds.

In regard to the average height (ending at the withers) of both sexes, males can grow to be 27 inches tall, and females must be at least 25 inches tall in order to meet the breed standard.

The Irish Setter is generally healthy. If adequate care is given throughout the dog’s life both at home and through veterinary care, this breed can live to be between 12 and 15 years old.

Many describe the Irish Setter’s personality as larger-than-life. Both dogs and puppies are outgoing and flashy while also remaining sweetly affectionate at the same time.

Irish Setters can also be clown-like and mischievous while also displaying traits of independence and intelligence. The breed is a good mix of everything, to say the least.

As mentioned before, the lighthearted nature of Irish Setter dogs and puppies makes them child, dog, and cat friendly. Toddlers and other small children should be carefully monitored in the presence of a large dog like the Irish Setter.

This breed is also admired for its adaptability. If brought along on a hunting trip or engaged in training, they can be quite serious and determined in their demeanor. However, when playtime rolls around, this breed is up for games of any kind. This dog can be the ultimate fun-loving playmate. 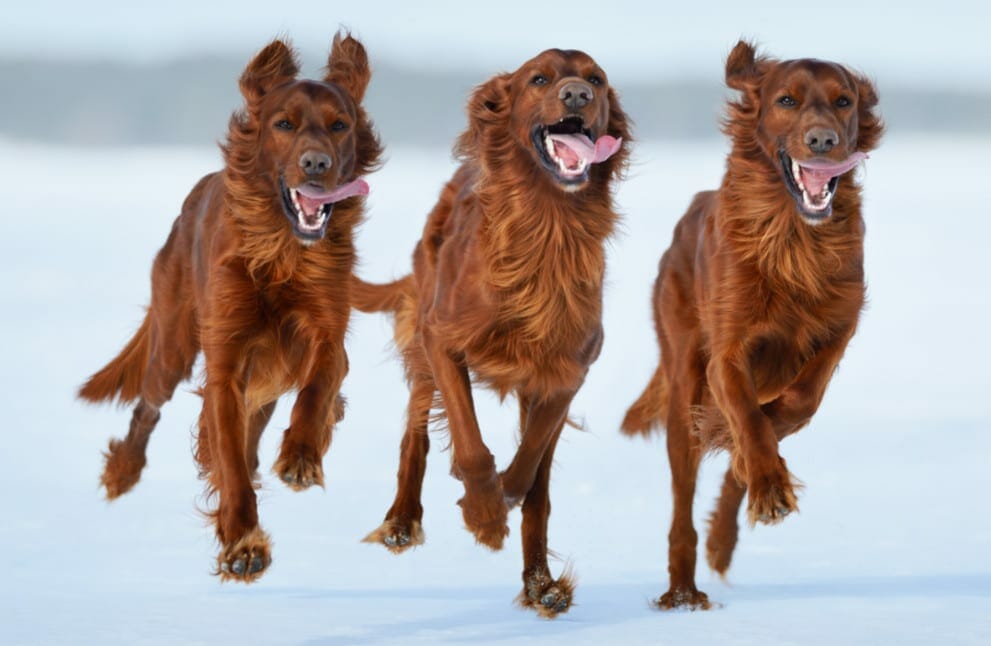 Proper Care of the Irish Setter

For the coat of the Irish Setter to remain in tip-top shape, frequent grooming is non-negotiable. A soft-bristled brush or a comb should be used twice weekly to gently brush out the dead hair and remove any knotting.

It is also suggested that dogs and puppies be bathed once per month to ensure its glorious coat remains shiny and healthy.

Besides this, keeping its nails trimmed and its ears clean is advised. Cleaning the ears can help prevent ear mites.

Because of their large size and high energy levels, Irish Setter dogs and puppies have a tendency to scarf down any food put in front of them. It is discouraged to give this dog lots of treats and food that is added to its normal meals.

Irish Setter dogs and puppies are prone to bloat, which can be deadly. Vets recommend that their food be given in small portions at a time to prevent eating too quickly and becoming bloated.

This breed should be given premium quality food that is high in protein.

Irish Setters are a member of the Sporting Group, which is known to have an abundance of energy it needs to let loose each day. At least 40 minutes of consistent physical activity is recommended for this breed. Open spaces are ideal for this dog to work off its energy. 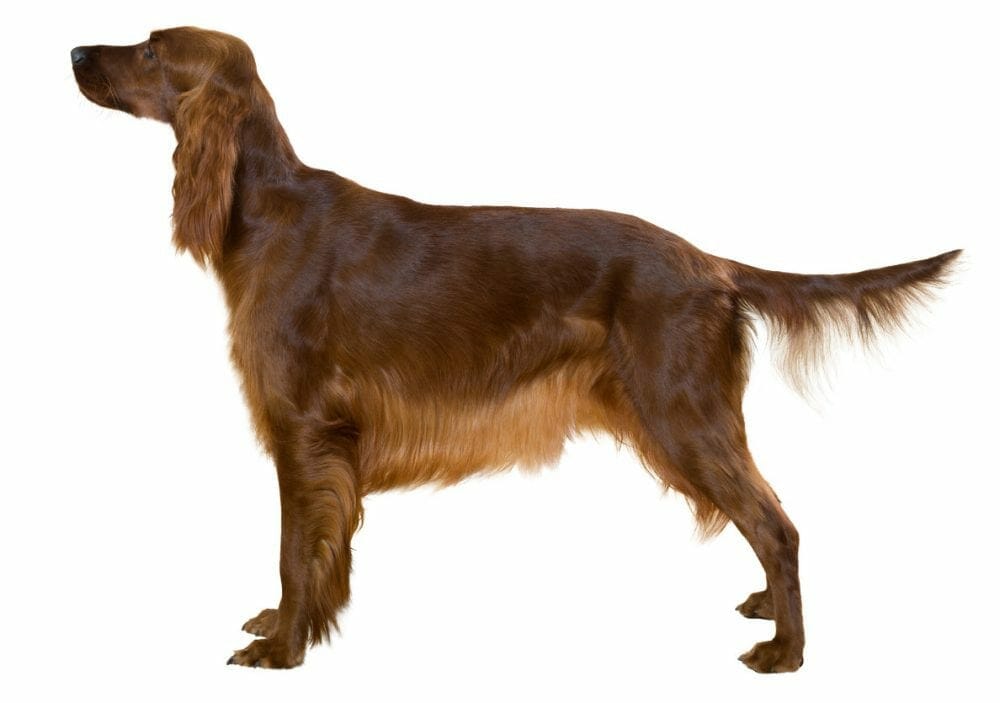 Because this breed can be on the obstinate side, early training is advised during puppyhood. Socialization and obedience training can be beneficial to puppies.

Even as adults, Irish Setters thrive by learning new tricks and commands, performing especially well when treats are used as an incentive. Training is most effective when approached with an element of fun since this breed is quite playful at heart.

In spite of its hardiness, there are several notable health conditions that prospective owners should be well aware of before purchasing from a breeder. A reputable breeder should be able to certify through early screenings that the dog is free of inherited disease. Any predispositions the dog may have to a condition should be fully disclosed to the buyer.

Below are the commonly observed health issues that Irish Setters tend to face:

For any worries or concerns about health, a qualified veterinarian is always the most valuable and accurate source of help.

Compare this breed with a Labrador Retriever. Both are larger dogs, but the Labrador has different colors and coats, but similar temperament as well as sharing the common Labrador hip dysplasia condition.