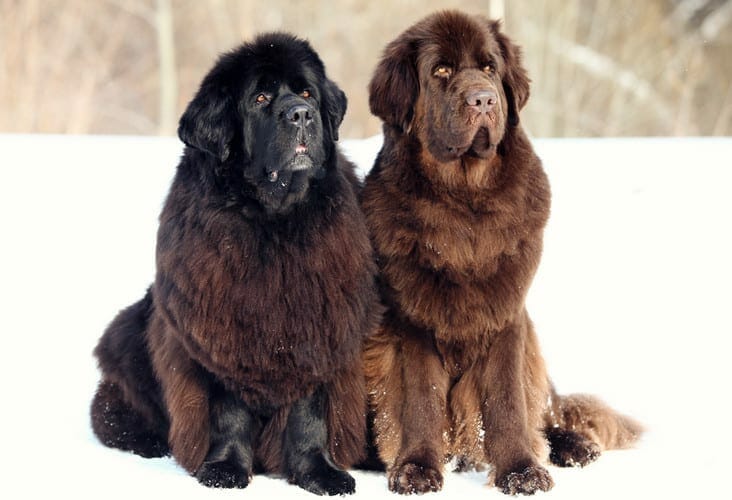 Often mistaken for a black bear, the Newfoundland breed is best described as the gentlest of giants in the canine world. Though this teddy-bear of a dog is one of the biggest dog breeds on record, it has a sweet temperament to go along with it.

For being such a massive animal, most would expect the Newfoundland to have a personality to match. However, this is not the case.

The Newfoundland’s loyalty and affection for its family has no bounds. Overly sweet and well-mannered, this dog is perfect for families with children. 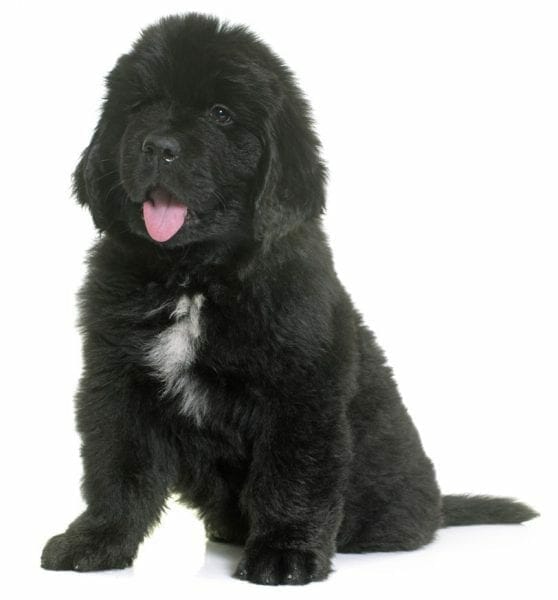 Although careful supervision and early training are always recommended for Newfoundland dogs and puppies, this dog tends to do extraordinarily well with young kids. Some even refer to this patient breed as a “nanny dog” due to the care they take in protecting children.

Sometimes called a “Newfie” or “Newf,” Newfoundlands require ample exercise and playtime. Bred to be water dogs, Newfoundlands are phenomenal swimmers. They also love hiking, running, and other outdoor activities.

Even more, Newfoundlands can work as watchdogs. Countless reports over the years have told of these heroic dogs saving lives from drowning and other dangerous situations.

Equipped with sharp instincts and an alert sense of danger, these dogs are not only devoted companions but potential life-savers.

Although there is no doubt the Newfie can be a fantastic addition to any family, prospective owners should keep in mind the sheer size and power that comes with their body type. Extensive training is required from puppyhood to produce a Newfie that is well-mannered and calm enough for children.

Furthermore, because boredom can often dispose Newfoundlands to destructive tendencies in the house, training is needed throughout its life to curb this behavior.

History of the Newfoundland Breed

Hailing from the Canadian province of Newfoundland, this breed’s first development is unknown. Some historians have traced its roots to the Pyrenees Mountains, but this is not proven.

What is known for sure is that these canines worked extensively in Newfoundland as a water and rescue dog on fishing boats. Naturally, with their muscular body and water-resistant coat, Newfies excelled at it.

During the 1700s, Newfoundland dogs were shipped to Europe, where it became famous in the United Kingdom and France for its swimming abilities. Whether it was rescuing fishermen or hauling in nets full of fish, the Newf did it all. Still, to this day, the Newfoundland’s tendency to swim and protect remains strong in its genetics. 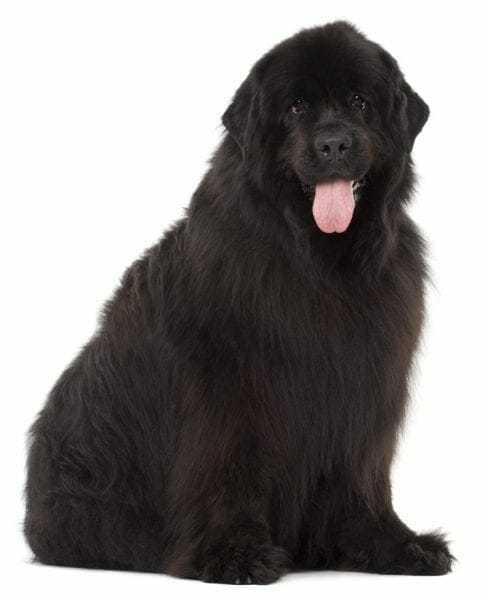 Below are some fascinating facts about the valiant Newfie.

Newfoundlands possess strong, powerful bodies. Their heavy-duty, water-resistant double coat often adds to their large size. As one of the biggest breeds of the dog world, Newfies are often likened to bears.

Newfoundland dogs have a large burly head, a prominent snout, and smaller floppy ears. Their eyes are also quite small in comparison to the rest of their head. Newfoundlands also have substantial, rounded legs and feet with webbing between the toes. This feature enables the breed to swim so well.

The Newfie’s stunning double coat is arguably its most admired feature. Its coat is ultra-thick, glossy, and straight. It may come in one of the following colors:

Many speculate how much this goliath of a breed may weigh. On average, a female Newfoundland may weigh between 100 and 120 pounds. The males, however, tend to possess a weight of up to 150 pounds. In terms of height, the females usually are around 26 inches and the males can be about 28 inches at the shoulders.

How to Care for a Newfoundland

Newfoundland dogs and puppies will need to be brushed well on a daily basis. A strong comb or brush is needed to get through its thick fur. In terms of shedding, Newfies tend to shed consistently only two times per year. Shedding season may require more thorough brushing to undo tangles and get rid of excess hair.

Training and Exercise for Newfoundlands

Extensive training for these dogs is needed beginning as a puppy. Ideally, Newfoundlands should be trained by its owner to develop a long-lasting relationship. A Newfie will thrive in a home where it is taught respect and manners as a puppy.

Socialization training is also ideal so that these pups will understand how to properly behave around children and other dogs. Luckily, Newfies are usually stress-free to train and will do anything to please its family.

This breed will also need at least 45 minutes of exercise per day, not only to keep up a healthy weight but also for the pure enjoyment this breed derives from physical activities. 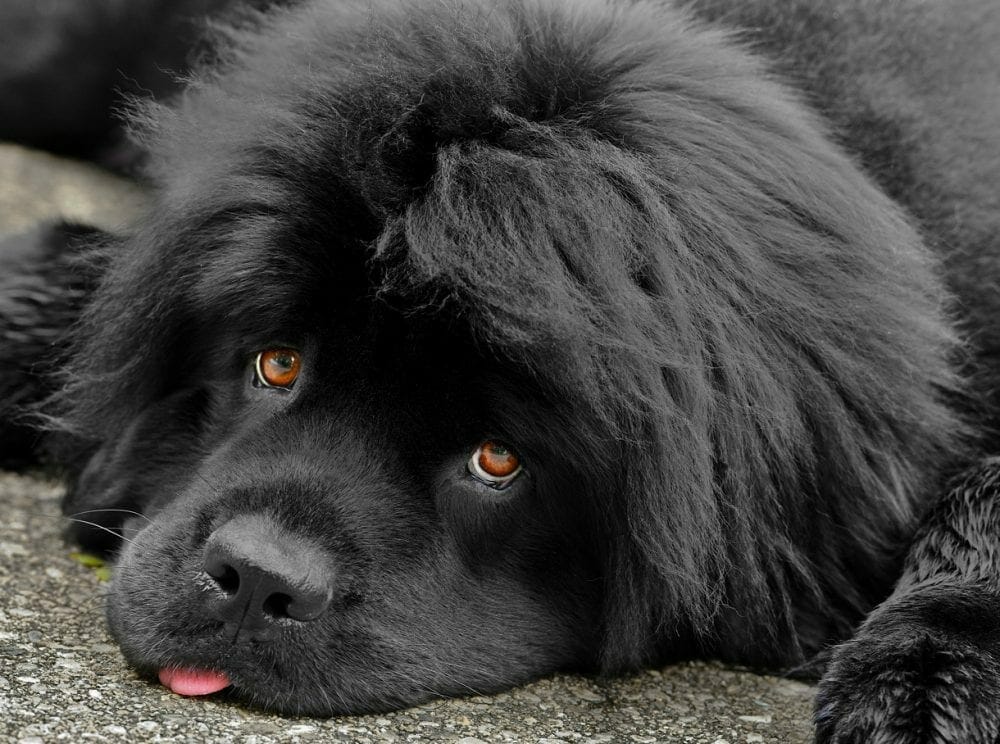 During the first two years of life, these dogs require a copious amount of nutritious food. After it ages more and begins surpassing the weight of at least 100 pounds, it will need less and less food. Bloat and obesity are common in this breed if too much food is given or not enough exercise is achieved.

The Newfoundland breed has an average lifespan between 8 to 10 years. Due to their huge size, these canines are often predisposed to some significant health concerns, such as:

Although health issues are sometimes unavoidable, one of the best ways to ensure a breed is healthy is to purchase from a reputable, certified breeder.

If a Newfie is purchased from a trusted breeder, it has a greater chance of living a long, happy life.

Looking for other large dogs? Check out the gorgeous Cane Corso, Labrador Retriever, and Irish Setter. Read about each breed’s personality, health, and conditions, then decide which dog works best for the family and dog, too!