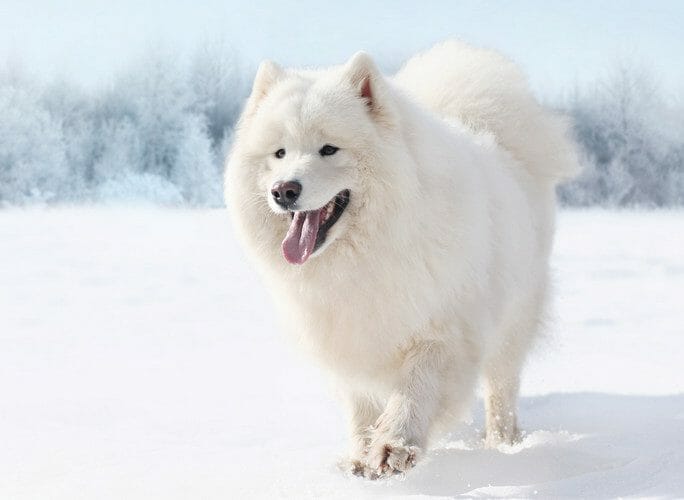 Originally part of the nomadic tribes that once trekked along the frigid subarctic terrain of Siberia, the Samoyed is a resilient breed that continues to warm the hearts of everyone around. (According to the Samoyed Club of America, the correct Samoyed pronunciation is “sam-a-YED.” 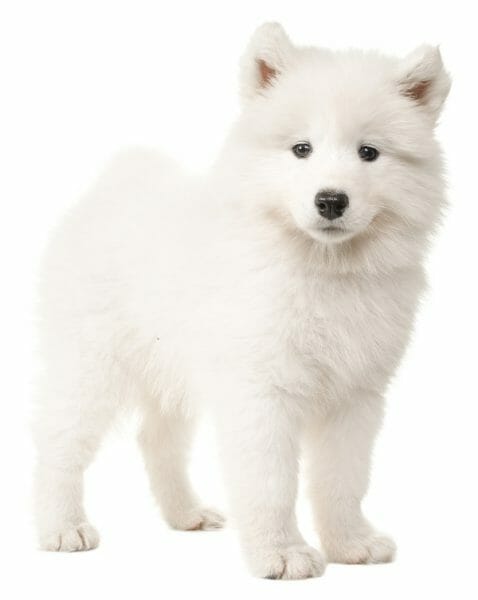 Known first and foremost for the unconditional friendliness they greet everyone with, these joyful pups are always willing to make a new friend. Sweet, mild, and always willing to play, Samoyeds (also called “Sammies”) make perfect companions for children or families of any kind. They often retain this child-like nature throughout life.

Highly intelligent, these canines can become mischievous and a bit stubborn if proper training is not started in puppyhood. As former pack animals with independent qualities, understanding who is in charge of the household needs to be established. Positive but resolute commands in training best fit their learning style.

Leaving such dogs alone for long periods is highly advised against. Not only do they thrive on human companionship, but boredom often leads them to troublemaking. Giving them small jobs to do around the house or puzzles to figure out is a great way of keeping their attention occupied for a long time.

In summary, these pups will be perfect companions in return for simply receiving consistent affection and spending quality time from family members.

Characteristics of the Samoyed

Well-structured and proportional, the body of the Samoyed is covered in copious amounts of snowy-white fluff from head to paw. Its stout, solid frame is often lost in the dense double coat. A large, wispy tail plumes over its back to the side.

Prominent and substantially-sized, its head features small, triangular ears that perk up slightly amidst its furry mane. Its black nose, eyes, and mouth stand out in stark contrast to its pure white coat.

One of is most lovable features is affectionately known as the “Sammy smile.” The corners of their mouths naturally rotate upward, giving them an irresistibly sweet expression that constantly graces their faces.

The Samoyed is often confused with another breed of dog, the American Eskimo dog. Both breeds have fluffy white coats, but the Samoyed is much larger. Both breeds require frequent exercise and can be trained. The Samoyed is the more outgoing dog and more welcoming to strangers and pets.

Its glorious double coat is usually white as snow and furry all over. Designed to withstand the most bone-chilling winters, the coat is resistant to many different weather conditions. Thick as can be, this beautiful coat may come in other slight variations of color, such as cream or biscuit.

Despite the thick coats and heavy shedding, the Samoyed is actually considered to be a hypoallergenic dog, with low dander levels and infrequent drooling.

The history of the Samoyed breed began over 1,000 years ago in the sub-zero temperatures common to Siberia, a vast province of Russia. An Asian group of nomads, known as the Samoyede tribe, slowly marched their way to make a home out of the frozen landscape of Oymyakon.

During the day, the dogs would work as hunters, guards, and herders of reindeer. Pulling heavy sleds of supplies was also numbered among the tasks to be done. As darkness overtook the land, they would provide warmth by huddling close with the tribespeople in small tents scattered under the snow-illumined night sky. Such a close living situation forged an unbreakable bond between the tribe and this dedicated breed. 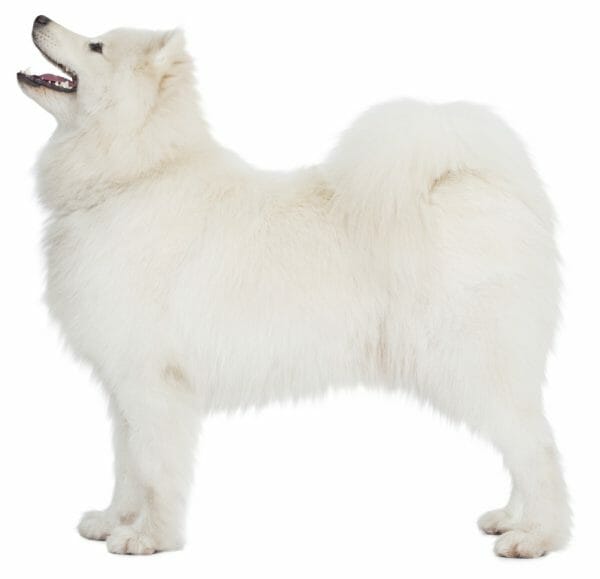 As the 18th century approached, this companionable canine began to rise in popularity throughout Europe after British explorers discovered them in the Arctic.

Queen Alexandria, the czarina of Russia, became enamored with the joyful dogs and often entered her own in dog shows. She would sometimes send them to other countries as gifts.

Little time had passed before the Samoyed was highly sought after throughout America due to its cuddly and lovable traits. In 1906, the breed was formally registered by the American Kennel Club (AKC).

Facts about the Samoyed 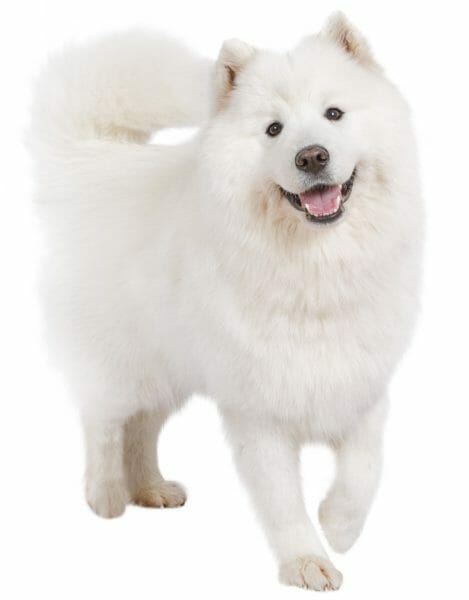 How to Care for a Samoyed

Possessing such a dense double coat comes with the need for frequent grooming. In terms of shedding, it occurs heavily throughout the year. In order to control tangles and mats, thoroughly brushing the coat with a durable brush is a daily requirement.

A Samoyed’s nails should be trimmed as needed or about once a month. It is also very important to regularly look through its fur for any signs of parasites.

Frequent, daily exercise is recommended for Samoyeds. These playful pups are up for any game or adventure. Being very people-oriented, they enjoy any activity involving bonding time with family.

However, these dogs should be kept securely on a leash or within a sound enclosure. Given its history as a fellow traveler, it is not uncommon for Samoyeds to wander off and go on their own escapades.

The typical lifespan of a Samoyed ranges between 12 and 14 years, making them a hardy breed.

As officially recommended by the American Kennel Club, Samoyed should receive evaluations of their heart, hips, and eyes at a young age. DNA-specific testing is also recommended.

Enumerated here are a few of the commonly seen medical diagnoses:

It is vital for a Samoyed’s health to remain up-to-date on vaccinations, check-ups at the vet, and any other needs. If a prospective owner is considering buying from a breeder, it is crucially important to understand the full health background before purchasing. Extensive research should be conducted on the specific breeder to ensure they are legit and certified.

Read about more large dog breeds and come back to GoodPooch each week for more great educational content about dogs and their health.