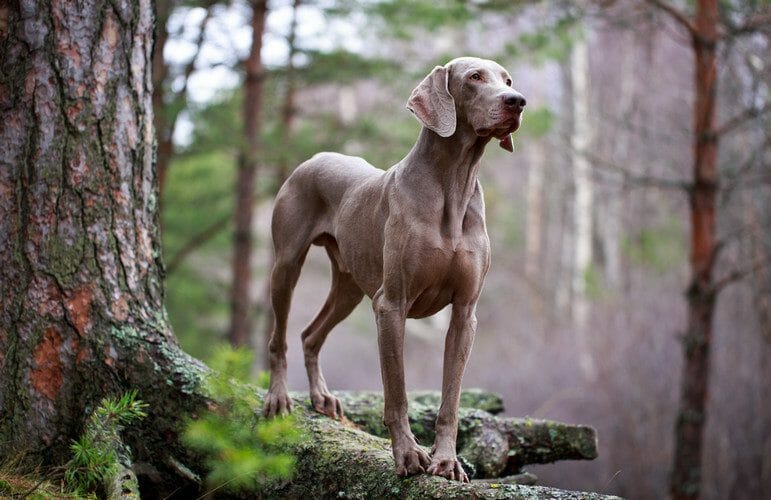 Hailing from the country of Germany, the Weimaraner dog breed is one that exudes intelligence, bravery, and extreme fidelity to its family. People wondering about Weimaraner pronunciation should know that Weimaraner is pronounced “wai-mr-aa-nr” or phonetically as “vy-muh-raa-nuh” or “why-muh-raa-ner.” (There are videos on YouTube about how to pronounce Weimaraner correctly.)

Centuries ago, Weimaraners were originally bred to be avid hunters of wild game of all sizes. Some even tracked and hunted grown bears. Because of this, these canines still possess sharp hunting instincts. A strict sense of obedience, agility, and unmatched determination make up this famous breed.

Weimaraners also flourish with deep connections to its family members. When it comes to fully trust someone, this dog exhibits an unwavering loyalty to this person. Known to be an excellent companion for children, Weimaraners are loving and friendly. 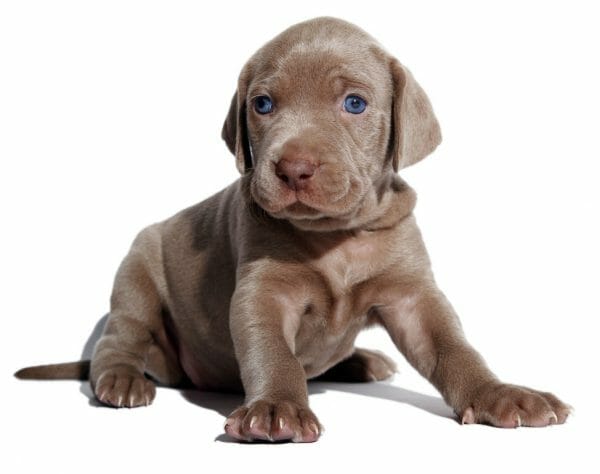 Weimaraners do not do well alone for extended periods of time. Severe separation anxiety is often seen in these canines, which may result in them tearing up furniture, excessively barking, or possibly injuring themselves. Therefore, it requires quality interactions with humans as much as possible during the day.

Extensive exercise on a day-to-day basis is also needed. Weimaraner do not respond well to being in the house for days at a time. Although Weimaraners are happy simply being with their family members, effort must be put into giving it physically and mentally demanding activities or outdoor exercise. Hiking, running, and agility or obedience training are all great options for giving the Weimaraner the vigorous activity it needs while spending time with it. Lastly, care should be taken to supervise it around other small pets. This canine is sometimes too intense for cats or other pets. 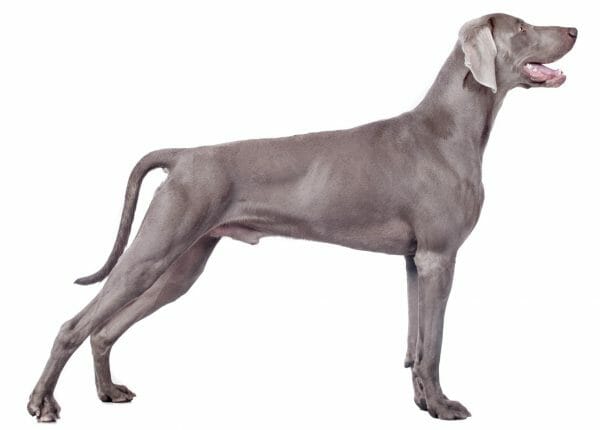 Possessing a body that is slender yet muscular, the sleek Weimaraner moves with a lithe gait. Bred with a prominent muzzle to help with its keen sense of smell and wide, round eyes that emanate intensity, this canine looks every bit a hunting dog. Its well-proportioned body features long legs, a powerful body, and a stubby, short tail. Its rather large head is made up of wide-set eyes that may be a light yellowish-gold or blue in color. On either side of its head hang huge, velvety soft ears. 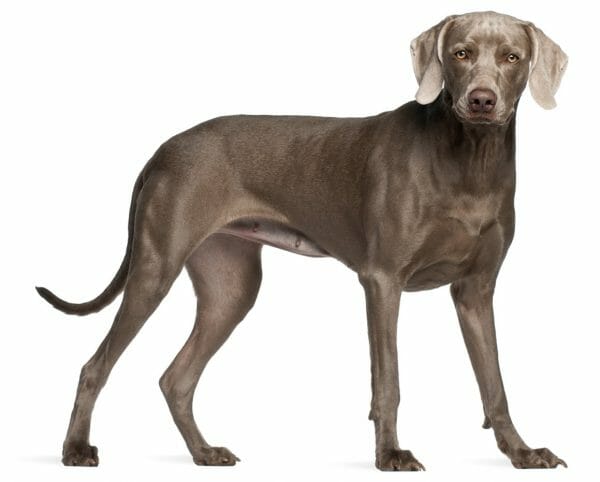 Weimaraner males tend to have a weight that is between 65 and 90 pounds. Females may weigh between 55 to 80 pounds. At the shoulder, male Weimaraners will stand between 25 and 27 inches tall, while females will stand 23 to 25 inches tall. In terms of height, both sexes  are generally the same size.

Weimaraners and the Vizslas look very similar and are often mistaken for each other, despite the Vizsla coat being reddish in color. Although both breeds are hunting dogs with a high prey drive and lots of energy, a Vizsla has a less dominating personality than the Weimaraner. The Vizsla is also slightly smaller than a Weimaraner—weighing between 45 to 60 pounds and standing between 21 to 24 inches tall.

History of the Weimaraner

Only about 200 years old, the Weimaraner breed was developed and altered with the intention of making it the best hunting dog in all of Germany. In the early 19th century, Grand Duke Karl August set out to accomplish this lofty goal. In order to achieve the monumental task, the German court was ordered to begin breeding several breeds, such as the Great Dane, English Pointer, and Bloodhound to create a canine that dominated the hunting scenes across Europe.

The Weimaraner, with its prime hunting genetics, exceeded every expectation. Weimaraners became an excellent sidekick and hunter of every type of wildlife. Wolves, deer, and bears were only some of its common prey. Its abilities were diverse, in that, it could easily switch from hunting big game to animals like rabbits or birds in an instant.

Once the best-kept secret of the German nobility, news soon spread of this aristocratic breed’s sensational hunting skills. Once the 1900s rolled around, the Weimaraner breed was exported to the United States. In less than 30 years, this canine’s popularity caught fire and spread. Soon, presidents and celebrities were wanting one of their own. Accepted and officially recognized as a dog breed in 1943 by the American Kennel Association, this breed ranks as 36th on the list of most popular dog breeds today. 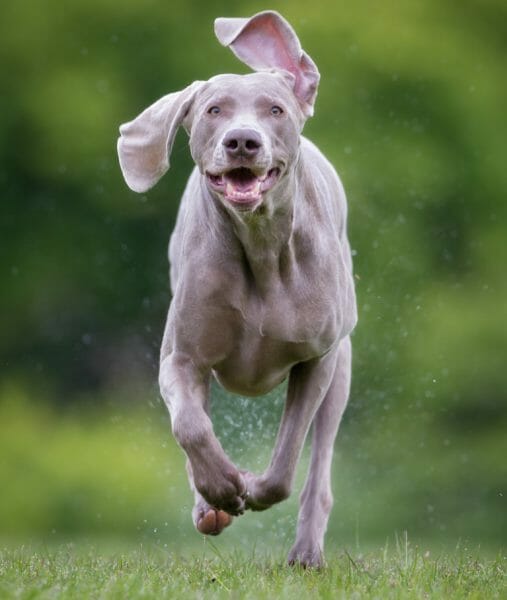 Recorded below are some interesting facts about the versatile and remarkable Weimaraner.

Caring for a Weimaraner

In terms of grooming, owners are delighted to find that this breed requires minimal brushing per week. Baths should be given as needed. In spite of their short and shiny coat, Weimaraners shed moderately. As with all dog breeds that spend time outside, flea and tick prevention is critical.

The dog’s ears should also be kept free of dirt or debris to protect it from ear mites. Its nails tend to grow fast, so cutting them frequently will keep the pup comfortable.

Given their high energy levels, Weimaraners will eat anything in sight. Dry food mixed with wet foods high in protein is ideal. Plenty of water should always be available.

When trained correctly, Weimaraners can be one of the most obedient, dedicated dog breeds. However, careful and consistent training must be conducted to reach this point. Weimaraners can be stubborn, independent, and too clever for their own good. These canines may not perform unless something is in it for them. Therefore, it is crucial to train this breed young and root out any bad qualities that could later develop. 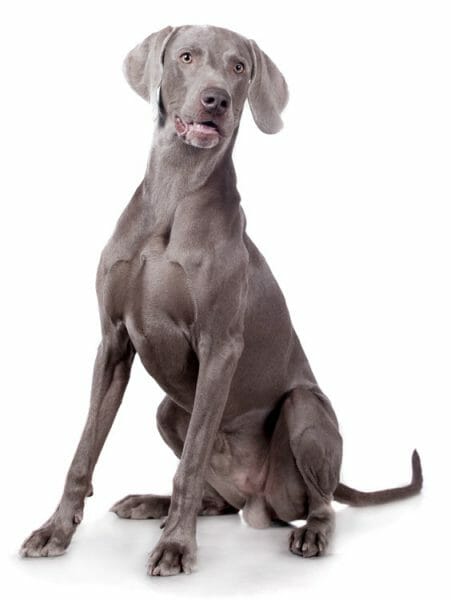 It cannot be stressed enough that Weimaraners need intense daily exercise not only for its physical and mental well-being but for its happiness.

In terms of lifespan, the Weimaraner may live between 10 and 13 years if kept in good health. The American Kennel Club (AKC) highly recommends that Weimaraners receive an evaluations of its eyes, joints, and endocrine glands early in life. Some of the common medical issues seen in these canines are:

Any questions or concerns about this breed’s health should be directed to the dog’s trusted veterinarian. This is the one professional that will know the dog personally, allowing for a more accurate diagnosis.

To learn about other larger dog breeds, check out the Cane Corso, Irish Setter, Labrador Retriever, Newfoundland, and Samoyed.